Meet Poorna Malavath in the making of 'Poorna' 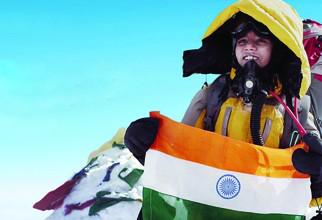 Rahul Bose is coming with a film based on a true story of Poorna Malavath, the youngest girl to conquer the Everest. The trailer launch was a grand affair and the trailer received a positive response. Now the makers have released video which shows the casting of Aditi Inamdar as Poorna Malavath.While Poorna Malavath feels she is an ordinary girl, Rahul Bose on the other hand thinks that she is not just ordinary but extra-ordinary. He finalised almost 500 Adivasi girls and shortlisted 109 girls for the role of Poorna. He was looking for a girl with a mix of emotional intelligence, vulnerability and determination to play the lead role.He found his Poorna in the 110th girl, Aditi Inamdar. For Aditi the toughest part was to climb the rock. Aditi says that Poorna taught her how to do it skilfully. Shekhar Babu, Mt. Everest Summiteer taught her the basic skills of rock climbing and mountain climbing.As the real Poorna expresses her views she says that most people believe that only boys are more capable than girls, but she proved that girls are far more capable and she is proud that she proved it. She shared a memory when she came to the base camp of Mt. Everest after climbing, her instructor told her that she created a world record and she felt like she was in heaven.'Poorna' is slated for a release on March 31, 2017.Watch the video here.FRIDAYMOVIEZ.COM is a chic movie portal bringing you the best of Bollywood and Hollywood in terms of the up-to-the-minute news, movie reviews and trailers, celebrity images, videos and profiles, exclusive inside information comprising original features, live event coverage, red carpet events, comprehensive archives and more.#G-1, New Udyog Mandir 2 Moghul Lane, Mahim (W) Mumbai 400016 India

Comments about openPR
OpenPR is clearly structured and remains true to its principle of confining itself to the essential parts. OpenPR has proven to be a very good and reliable partner to our media agency: Within the shortest time the releases are online and go down well with the media representatives. The success of OpenPR is reflected in the steadily increasing number of press releases. It is good that OpenPR exists!
Ursula Koslik, Director Marketing & PR, F+W Hamburg