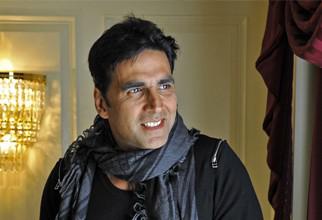 Known for his active co-operation in every social cause, Akshay Kumar is one such Bollywood actor who had always been supporting the army forces and the ones who guard our nation on the borders; tagged as the patriotic actor himself, Akshay recently opened up about women safety and expressed his concerns about the same through a video. This time Akshay is standing up for the betterment of the families of the soldiers who lose their life while fighting for the security of our nation.He posted a video on his Twitter handle and captioned it as, "Here I am standing up AGAIN for something I truly believe in coz THEIR well-being MATTERS to ME.I'd love to know if it does to YOU as well?."The video starts with Akshay thanking all the supporters and overwhelming response he received via messages and tweets who liked his take on women safety. India celebrates its Republic Day on 26th of January and as it is round the corner, Akshay has a brilliant idea in his mind to help the families of the martyrs.As Government always compensates the families of the soldiers, many common people regret of helping the families. According to Akshay we should have a website or a mobile app where the bank account details of the closest member of the soldier should appear on the website or app along with the financial status of the family on the very next day of his death.Talking about the donation amount he said that the person can donate whatever amount of money he wishes to donate and there will be no restrictions on the amount. The website or the app will have to showcase all the details of the donor and the amount of donation which will maintain the transparency of the transactions. The moment the amount reaches a limit of 15 lacs Rs. The said account will be removed from the website for forever. He took help of maths to explain his theory, he said we live in a country with a population of over 125 crores of people, even if 15000 people donate merely 100 Rs. at a time the amount of 15 lacs Rs. will reach to the familes in just 4 hours, which is the normal time taken by the banks for the e-transfer transactions.Akshay has also urged the people to share their views and opinions so that he himself will take efforts to create such a website or an app with the permission of the Government and the armed forces.What is your opinion about Akshay's idea???Watch the whole video here.FRIDAYMOVIEZ.COM is a chic movie portal bringing you the best of Bollywood and Hollywood in terms of the up-to-the-minute news, movie reviews and trailers, celebrity images, videos and profiles, exclusive inside information comprising original features, live event coverage, red carpet events, comprehensive archives and more.#G-1, New Udyog Mandir 2 Moghul Lane, Mahim (W) Mumbai 400016 India

02-20-2019 | Business, Economy, Finances, B …
eonmarketresearch
Global Sodium Nitrate Market 2019 - BASF, Sumitomo, Akshay Group, SNDB (M/S Seth …
This new report by Eon Market Research, titled “Global Sodium Nitrate Market 2019 Research Report, 2015 – 2025” offers a comprehensive analysis of Sodium Nitrate industry at a global as well as regional and country level. Key facts analyzed in this report include the Sodium Nitrate market size by players, regions, product types and end industries, history data 2014-2018 and forecast data 2019-2025. This report primarily focuses on the study
04-20-2018 | Industry, Real Estate & Constr …
WISE GUY RESEARCH CONSULTANTS PVT LTD
Global Sodium Nitrate Market Analysis 2018 Forecasts To 2023: BASF, Akshay Group …
Global Sodium Nitrate Market Description:- Wiseguyreports.Com Adds “Global Sodium Nitrate market 2018: Global Analysis, Industry Size, Share, Trends, Application Analysis and Growth Opportunities Forecast to 2023” To Its Research Database The global Sodium Nitrate market will reach xxx Million USD in 2017 and CAGR xx% 2011-2017. The report begins from overview of Industry Chain structure, and describes industry environment, then analyses market size and forecast of Sodium Nitrate by product, region and
01-11-2017 | Leisure, Entertainment, Miscel …
FridayMoviez
Akshay Kumar Romances Huma Qureshi In This New Song
The makers of the film 'Jolly LL.B 2' released the first song from the film 'Go Pagal' in the recent past which gave us a perfect dance number to groove this Holi. While the film has a comedy genre, it has an romantic aspect too. And what better it can be than a romantic song to depict romance. The romantic track from the film 'Bawra Mann' is out just a
01-04-2017 | Leisure, Entertainment, Miscel …
FridayMoviez
Go Pagal With The First Track From Akshay Kumar's 'Jolly Ll.b 2.'
Just a day ago Akshay Kumar shared a small teaser of the song 'Go Pagal' from his upcoming film 'Jolly LL.B 2.' The first ever song from the film is finally out today. Akki shared the song link on his Twitter handle by tweeting, "Here it is.. #GoPagal with our first song, my favourite song from #JollyLLB2!!." The song 'Go Pagal' completely justifies its title and shows all the antics by
01-03-2017 | Leisure, Entertainment, Miscel …
FridayMoviez
Akshay, Salman And Karan Come Together For A Big Project
The year 2017 seems to be the year of surprises as many new twists and turns are unfolded right from its first day. The greatest news on the third day of the year is that Akshay Kumar, Salman Khan and Karan Johar have joined hands for a film. The movie will star Akshay Kumar as the main lead and Karan Johar will produce it along with SKF Films which is Salman's
12-28-2016 | Advertising, Media Consulting, …
FridayMoviez
Akshay Kumar To Endorse A Popular Vehicle Brand
As we all know how popular Khiladi Akshay Kumar is in the industry. Apart from films Akki is even seen endorsing many top brands be it clothing or lifestyle of homecare. Now the actor is all set to endorse a popular vehicle brand. Akshay Kumar will be the face of Tata Motors Commercial Vehicle business unit. Tata Motors said in a statement, "Indian cinema's 'original Khiladi' will make his blockbuster entry
Comments about openPR
OpenPR ist the nicest and most clearly laid out PR platform I have seen to this day. The press releases are displayed very nicely and clearly and without any unnecessary frills. The updates are fast and the finished release looks appealing and is clearly legible. Even with 16 years of experience one discovers new things from time to time. Congratulations!
Gabriele Ketterl, Director Marketing & PR, Menads