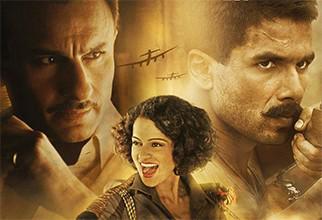 After treating the masses with the splendid trailer and a bold and beautiful song 'Bloody Hell', the makers of 'Rangoon' have now come up with an interesting video of the making of the trailer.The trailer of Vishal Bhardwaj's 'Rangoon' has been receiving appreciation from all spheres qualifying the movie as one of the most anticipated films of 2017. The making of the trailer takes the audiences through the interesting journey of each character and reveals the hard work the cast and crew has put in to showcase the stunning trailer.'Rangoon' takes the audiences back in action to the British-India era of the second world war.Vishal, who is known to bring out the best in his actors, has got the audiences highly anticipating the release of the movie.'Rangoon' is set against the backdrop of second world war, displays an interesting love story between Kangana Ranaut, Shahid Kapoor and Saif Ali Khan, where Kangana will be seen playing the role of Julia, a film actress from the 1940's, while Shahid Kapoor is playing a character of Nawab Malik an Indian troop leader and Saif Ali Khan, on the other hand plays a top-notch filmmaker.The period drama on Love War Deceit, with its stellar cast is all set to deliver a spectacular battle of love, with the sizzling chemistry the actors have displayed in its trailer itself!Watch the making video here.FRIDAYMOVIEZ.COM is a chic movie portal bringing you the best of Bollywood and Hollywood in terms of the up-to-the-minute news, movie reviews and trailers, celebrity images, videos and profiles, exclusive inside information comprising original features, live event coverage, red carpet events, comprehensive archives and more.#G-1, New Udyog Mandir 2 Moghul Lane, Mahim (W) Mumbai 400016 India

05-24-2017 | Arts & Culture
NewsPatrolling
Prime Minister Narendra Modi meets Miniature Artist Suvigya SharmaD2S
"NewsPatrolling.com - Best blog of india" : Indian miniature artist Suvigya Sharma makes a new mark in history- does a hyperreal portrait of Hon. PM Narendra Modi and present it to him at the Prime Minister’s Office in Delhi. Suvigya is India’s only artist renowned for portrait miniature paintings that he commissions for his crème de la crème clientele in the country and abroad. The PM’s love for art is no
01-30-2017 | Leisure, Entertainment, Miscel …
FridayMoviez
Kangana Flaunts Her Classical Dance Moves in 'Rangoon' New Track
Kangana Ranaut earlier said that 'Rangoon' has three heroes. Here she tagged himself as the third hero apart from Shahid Kapoor and Saif Ali Khan. And she is truly living by her statement with her massive performance which we saw in the trailer and the song. Now she flaunting her classical dance moves in the newly released song 'Mere Miyan Gaye England.' 'Mere miyan gaye England, bajaake band, na jaane kaha
01-19-2017 | Leisure, Entertainment, Miscel …
FridayMoviez
'Yeh Ishq Hai' Song From 'Rangoon' Narrates A Fairy - Tale Love Story
Kangana Ranaut, Shahid Kapoor and Saif Ali Khan have already won hearts with their quintessential acting in the film 'Rangoon' which we saw in the form of the trailer just a few days back. While the first song from the film 'Bloody Hell' showed the 'Hunterwali' Kangana wooing the soldiers, this song on the other hand shows her love story with Saif and Shahid. The song titled as 'Yeh Ishq Hai'
01-06-2017 | Leisure, Entertainment, Miscel …
FridayMoviez
Kangana Ranaut Steals The Limelight In The First Official Trailer Of ‘Rangoon? …
The trailer of the much awaited film 'Rangoon' is finally out and Kangana Ranaut is back and how! The lady steals the whole limelight from the two classy men Shahid Kapoor and Saif Ali Khan. Even Saif was away from the screen for quite a long time now and going by the trailer we just loved his acting skills. The film is set on the backdrop of World War II and
Comments about openPR
9 o'clock: discuss press release with client, 10 o'clock: submit release to openPR, within the briefest possible time release is published and displayed in a prominent place on openPR.de. I am thrilled!
Zehra Spindler, Calypso Now! - Communication Agency