Akshay, Salman And Karan Come Together For A Big Project 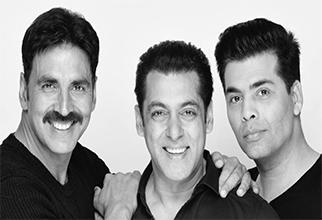 The year 2017 seems to be the year of surprises as many new twists and turns are unfolded right from its first day. The greatest news on the third day of the year is that Akshay Kumar, Salman Khan and Karan Johar have joined hands for a film.The movie will star Akshay Kumar as the main lead and Karan Johar will produce it along with SKF Films which is Salman's home production and will be directed by Anurag Singh. The film is slated to release in the year 2018.The trio announced the news on their social media platforms and gave all their fans a pleasant surprise. Akshay Kumar tweeted, "Coming together for a film produced by friends, @BeingSalmanKhan and @karanjohar, starring me! Out in 2018."While Karan Johar wrote, "Supremely excited to coproduce with @BeingSalmanKhan #SKF on a film starring @akshaykumar directed by Anurag Singh...releasing 2018!."Salman Khan too took to his Twitter handle and tweeted, "Joining hands on a project where @akshaykumar is the hero and will be co produced by @karanjohar and #SKF."Well with the trio coming together something really interesting and exciting is sure to happen!FRIDAYMOVIEZ.COM is a chic movie portal bringing you the best of Bollywood and Hollywood in terms of the up-to-the-minute news, movie reviews and trailers, celebrity images, videos and profiles, exclusive inside information comprising original features, live event coverage, red carpet events, comprehensive archives and more.#G-1, New Udyog Mandir 2 Moghul Lane, Mahim (W)

You can edit or delete your press release Akshay, Salman And Karan Come Together For A Big Project here

08-22-2017 | Leisure, Entertainment, Miscel …
Sterling Media
Double Dussehra Dhamaka as Varun Dhawan dons a double role in Judwaa 2, releasin …
Brace yourself for an explosion of laughter, mayhem and entertainment, as the deadly trio of Varun Dhawan, Jacqueline Fernandez and Taapsee Pannu join hands with comedy king director David Dhawan to replicate rib-tickling magic this Dussehra, with Judwaa 2, releasing on the 29th of September. Presented by Fox Star Studios and produced by Sajid Nadiadwala’s Nadiadwala Grandson Entertainment, the comic caper “Judwaa 2” sees Varun Dhawan in a
12-27-2016 | Leisure, Entertainment, Miscel …
FridayMoviez
'Being In Touch' With Salman Khan
Salman Khan celebrates his 51st birthday today and we will like to remind you that just a few days back he made an announcement about launching his own application. He also said that he will unveil the app on his 51st birthday. Now he has kept his promise and his first ever app named as 'Being In Touch' is out. He posted a video on his Twitter handle and captioned it
11-25-2016 | Leisure, Entertainment, Miscel …
FridayMoviez
Hrithik Roshan Ranked As No.3 On The World's Most Handsome Faces List
It isn't a surprise that Hrithik Roshan, who is known for his drop-dead Greek God looks has made it to the list of Most Handsome Man in the World list put out by a leading international website. His stunningly good looks, his coloured eyes and over all personality have often got him on the list of best looking men across the world. Keeping the Bollywood superstar company in the envied top
04-13-2010 | Media & Telecommunications
A&O Lighting Technology GmbH
A&O Middle East supplied FALCONs for opening of a new Monument in Bahrain
In Sakhir, Bahrain the Bahrain National Charter Monument was inaugurated at a Royal ceremony marking the anniversary of the National Action Charter on 14 February. This significant occasion took place on the museum site which is set up in an amphitheatre style. Pico International (Bahrain) was responsible for the event concept, design, implementation and show production including the multimedia and lighting design, which marked the celebratory opening ceremony of one
05-08-2007 | IT, New Media & Software
Saltech Systems
Saltech Systems, at SaltechSystems.com, is an innovative Web design and developm …
Since 2003, it has been committed to creating beautifully designed yet affordable Web sites. "My goal is to provide excellent quality and top-notch customer care," says Salman Maqsood, president of the company. "What people want is someone who can be there when they need help." Maqsood's wife, Madiha Rana, started the company while Salman was taking classes at Iowa State University. Three years ago, when their son Humza was born, Salman joined
01-23-2006 | Politics, Law & Society
Fiona Fine
Bin Laden and the only Al Jazeera journalist to speak out?
The CIA have confirmed that it is bin Laden on the tape released by Arabic-language television station, Al Jazeera – and as the tape was released, a new novel by a former Al Jazeera “Top Secret” producer has been published. “Top Secret” is Al Jazeera’s flagship investigative programme and won accolades for identifying the perpetrators of 9/11 before the FBI or CIA did. The novel, “The Dream of the Decade –
Comments about openPR
OpenPR is clearly structured and remains true to its principle of confining itself to the essential parts. OpenPR has proven to be a very good and reliable partner to our media agency: Within the shortest time the releases are online and go down well with the media representatives. The success of OpenPR is reflected in the steadily increasing number of press releases. It is good that OpenPR exists!
Ursula Koslik, Director Marketing & PR, F+W Hamburg