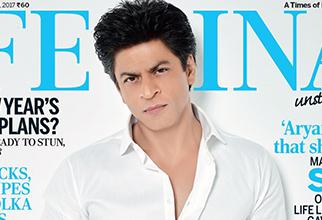 The countdown for the New Year has already begun with just few hours to go and many celebs have already landed in their favourite destinations with their loved ones. As the year witnessed many blockbuster movies, it also witnessed many celebs make their way straight to the cover page of magazine covers, slayed it like anything. Superstar Shah Rukh Khan will now make the beginning of the new year in the most stylish way.SRK has featured on the January 2017 issue of Femina magazine and we just can't take our eyes of him. Dressed in a plain white shirt and black trousers SRK is looking every bit debonair. His suave and classy attitude adds an extra factor to his handsome looks.On the work front Shah Rukh will be next seen in his much awaited film 'Raees' which will release on January 25, 2017.Take a look at the poster here.FRIDAYMOVIEZ.COM is a chic movie portal bringing you the best of Bollywood and Hollywood in terms of the up-to-the-minute news, movie reviews and trailers, celebrity images, videos and profiles, exclusive inside information comprising original features, live event coverage, red carpet events, comprehensive archives and more.#G-1, New Udyog Mandir 2 Moghul Lane, Mahim (W) Mumbai 400016 India

03-18-2019 | Business, Economy, Finances, B …
Supply Demand Market Research
Turmeric Market 2019 Analysis by: Earth Expo Company , ITC Spices , Nani Agro Fo …
2019 Global Turmeric Market report provides key information about the industry, including invaluable facts and figures, expert opinions, and the latest developments across the globe. The Report also calculate the market size, the report considers the revenue generated from the sales of This Report and technologies by various application segments. …Turmeric or Curcuma longa is a rhizomatous herbaceous perennial plant that belongs to the ginger family, Zingiberaceae. Turmeric as a
06-13-2018 | Business, Economy, Finances, B …
business news
Global Corduroy Market 2018 - Velcord, Laxmichand V Shah & Co, Tcm Textiles
Apex Market Reports, recently published a detailed market research study focused on the “Corduroy Market” across the global, regional and country level. The report provides 360° analysis of “Corduroy Market” from view of manufacturers, regions, product types and end industries. The research report analyses and provides the historical data along with current performance of the global PP Pipe industry, and estimates the future trend of Corduroy on the basis of
01-18-2018 | Business, Economy, Finances, B …
business news
Global High Alumina Ceramic Market 2018 - Vautid Shah, Materion, CoorsTek, In, A …
The statistical surveying information incorporated into the High Alumina Ceramic report is the aftereffect of significant essential and optional research exercises. The report fragments the worldwide market for High Alumina Ceramic based on makers, item compose, applications, and Region. In this report, each fragment is contemplated completely and measurements are introduced in detail. The report offers an exact outline of the worldwide High Alumina Ceramic advertise covering key factors, for
10-30-2017 | Health & Medicine
Pharamceutical
Shah
Point-of-care infectious disease diagnostics market has grown manifold over the last 20 years, driving major profits across value chains. The industry witnessed slow growth during 2005–2010 before taking a major leap with adoption of mobile technology. Point-of-care testing or bed-side testing refers to tests that are performed near the site of patient care. These tests can potentially improve detection and management of infectious diseases by reducing time between tests and
06-27-2017 | Business, Economy, Finances, B …
Fior Market
Global Copper Foil Market 2017 - Shah Dipchand, Targray Technology International …
The Copper Foil report is offers a clear picture of the current and future trends, developments and opportunities. The report, prepared by a highly seasoned team of analysts and data experts, carries an array of tables and graphs besides qualitative analyses. Starting with a discussion on the current state of the Copper Foil market, the report goes on to discuss the dynamics affecting each segment within it. The report segments
01-24-2017 | Leisure, Entertainment, Miscel …
FridayMoviez
'Dhingana' Song From 'Raees' Introduces A New Shah Rukh Khan
Shah Rukh Khan is leaving no stone unturned for the promotion of 'Raees.' Due to Uri attacks, Pakistani actress Mahira Khan will not be promoting in India and the sole responsibility lies on the shoulders of SRK. The duo earlier promoted the film together in Dubai. SRK as Miyanbhai has various shades, a true businessman he is, Miyanbhai is a romantic person too. We've seen his romantic side in the
Comments about openPR
I can't but agree to the positive statements about your portal: easy to use, clear layout, very good search function, and quick editing!
Jens O'Brien, Borgmeier Media Communication