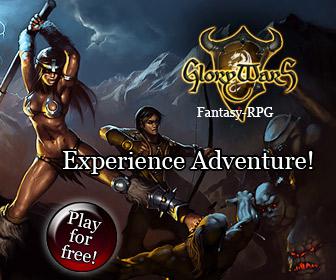 Despite the unpredictable Spring weather, Berlin-based web game developers GameArt Studio are already in Spring-mode, and are therefore hosting a Spring Fan Art Contest for all players of the fantasy web game Glory Wars.Anyone can take part in the contest, starting today and ending on 10.06.2012 at 01:00 a.m. server time. As always, there are a multitude of sumptuous prizes to be won: along with Premium tickets, the best Fan Art entries will also be rewarded with the standard Glory Wars currency of gold. The competition is not restricted to any particular theme, which means that players can let their imaginations run wild and use any conceivable art-form, be it a sketch, stop-animation, or even a video – while of course still being in some way related to the epic world of Glory Wars. For example, it might have something to do with the clans, warriors, archers, mages or gods of this fantasy world. There are no limits when it comes to fantasy. To take part in the contest, all you need is a Glory Wars forum account. If you don't have a forum account yet, it won't take long - registration to the forum is quick and easy to do, not to mention completely free!There is an official participation thread under the 'Promotions and Contests' section of the forum where you can post your competition entries. The winners will be decided over the course of the following week by a panel of Support Team members from GameArt Studio.The Glory Wars Team wishes you the best of luck and plenty of fun!GameArt Studio GmbH was founded in 2006 in Berlin and rapidly grew to become one of the most innovative developers and producers of so-called web games. Web games are computer games through which real players can play with and against each other over the internet. They can be played for free on any internet browser, with no software installation or downloads required. With their four games ?Holy War“, ?Tagoria“, ?A.I. War“ und ?Glory Wars“, GameArt Studio already entertain over 5 million players worldwide.GameArt Studio GmbH Bismarckstra?e 107 10625 Berlin, Germany E-Mail: [email protected] Internet: www.gameartstudio.de

05-13-2014 | IT, New Media & Software
GameArt Studio GmbH
Online racer Quantum Rush soon as a single player version?
The developer team of online racer Quantum Rush, which is currently in the open beta phase and has fans all across the world, considers a single player version of the game. Now the community has to decide – the team is asking for feedback on this idea! The reason for these thoughts are the current lag problems. Although the next patches will bring optimizations and improvements, the main reason will remain:
02-10-2014 | IT, New Media & Software
GameArt Studio GmbH
4th international world opened in medieval browsergame Holy War
Today a brand new international world opened in the medieval browsergame Holy War. This is the first new world since the big battle update and the introduction of the battle fatigue in December. The big December update had a rocky start – but everything is smoothed out again and all the new features can now be used to their full potential! The city battles allow every order to conquer the cities on
08-26-2013 | IT, New Media & Software
GameArt Studio GmbH
New international world in Tagoria & recruiting contest
A short while ago Tagoria, the popular fantasy browsergame of Berlin based online game developer GameArt Studio, celebrated its 5th birthday with a dimension battle weekend. Now it opens a new world and stages a big recruiting contest! It will be the third international world in Tagoria. International means that every player can freely choose between 11 languages and even change his selection at anytime during play. Of course this applies to
05-22-2013 | IT, New Media & Software
GameArt Studio GmbH
Holy War - The players have decided
The players have decided: No new regulation for battle declarations in medieval browser game Holy War! The result of a survey started in April among the players of worldwide-known medieval browser game Holy War is in: Surprisingly the community voted against a regulation that intended to restrict the activities of so-called blocking orders. 65% of the players voted against the regulation and the comment section also showed clearly that the majority of

11-02-2018 | Fashion, Lifestyle, Trends
War Paint
War Paint Makeup For Men Launches
Start-up brand War Paint is due to re-launch its new range of makeup designed specifically for men. The brand offers a range of 4 core products; Foundation, Concealer, Bronzer, and Tinted Moisturiser, their products are available in 5 shades ranging from Fair to Dark. With the growth in makeup for men in recent years and the increasing demand for cosmetic and skincare products. War Paint despite being less than a year
10-10-2017 | Leisure, Entertainment, Miscel …
Advent Messenger
When Pastors Declare War Within the Church
Postmodernism has set its sights against all truth. An all out assault against the gospel of Jesus, who is the “way, the truth and the light” (John 14:6) is the target. This war mentality is the very imagery that a Seventh-day Adventist Pastor from the Pacific Northwest recently gave in the Gleaner Now, the official publication of the North Pacific Union Conference of Seventh-day Adventists. In an article entitled A Church
09-12-2017 | Politics, Law & Society
Advent Messenger
The New "Uncivil" Civil War in America
"Every kingdom divided against itself is brought to desolation." Matthew 12:25. Divisions will cause any nation to come to its end. This is where all the fighting, the riots and protests that we see daily in the heartland of America is taking us to. The mob mentality is only getting worse as protesters turn into violent revolutionaries. Yesterday during President Trump's visit to Phoenix protesters actually attacked police with rocks and
08-08-2011 | Business, Economy, Finances, B …
Detail 2 Leisure
Detail2Leisure Comment on Hospitality Sector Talent War
London, United Kingdom (2nd August, 2011) – Detail2Leisure, an established leisure and hospitality recruitment specialist, comment on the hospitality sector talent war across the branded restaurant market. Detail2Leisure are the chosen partner recruitment company for many of the finest and most established hospitality companies in the UK, and work in partnership with organisations to find the candidates with the most aligned experience and skills for their clients’ job vacancies. Detail2Leisure are
01-12-2011 | IT, New Media & Software
Cloudipedia
Is Salesforce Entering a Year of War?
As infrastructure prices plummet, data centers look toward value-added platforms to differentiate. The editors of Cloudipedia made a number of bold yet accurate predictions last year about the future of cloud. 2011, the editors say, will be the year to either make friends or enemies with Salesforce.com. Among the predictions last year: that infrastructure would commoditize and prices would fall, open standards would become a driving force, mega-million dollar enterprise software projects
10-26-2010 | Business, Economy, Finances, B …
Vapamore Declares War On Bed Bugs
Vapamore Declares War On Bed Bugs
Why use pesticides when you can kill bed bugs with just steam? Using a high-temperature steam cleaner is an alternative to pesticides. Arizona-based company Vapamore offers their product the MR-100, as an effective alternative to pesticides. “We are confident that the Vapamore MR-100 which was designed keeping bugs menace in mind can assure you no bugs biting night. With a product like the MR-100 we declaring war against
Comments about openPR
OpenPR is clearly structured and remains true to its principle of confining itself to the essential parts. OpenPR has proven to be a very good and reliable partner to our media agency: Within the shortest time the releases are online and go down well with the media representatives. The success of OpenPR is reflected in the steadily increasing number of press releases. It is good that OpenPR exists!
Ursula Koslik, Director Marketing & PR, F+W Hamburg