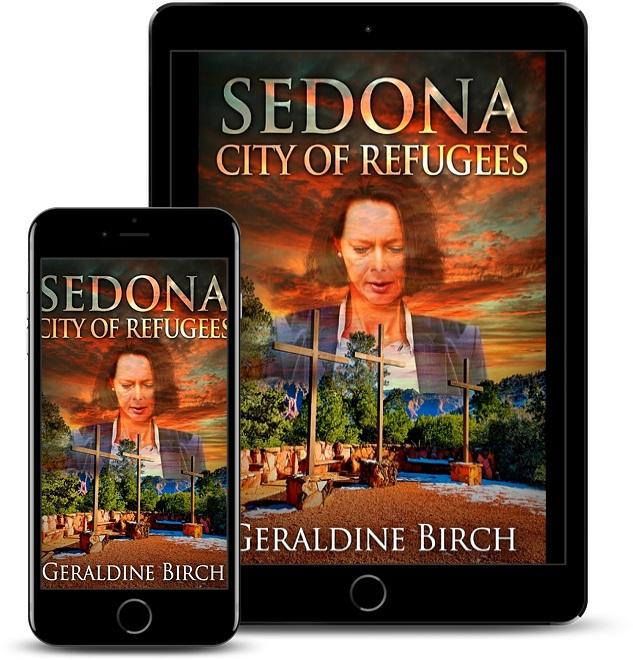 Author Geraldine Birch Releases Contemporary Novel Set in Sedona, Arizona Author Geraldine Birch is pleased to announce the release of her contemporary novel, Sedona: City of Refugees. Set amid the red rock beauty of Sedona, Arizona, this is the story of a widowed middle-aged newspaper reporter searching for God and herself amid the rubble of her life.Kathleen Sullivan Buckley writes profiles for a small newspaper about various characters that inhabit the tourist community. Running parallel to her articles is Kathleen's own story: She is a fallen-away Roman Catholic attempting to deal with her loss of faith; she feels spiritually buffeted by her married lover's powerful born-again Christian beliefs and the persistent philosophies of the New Age that constantly swirl about Sedona. Meanwhile, her brother-in-law is working his political machinations to get her thrown off her late husband's will so he can conclude a devious land trade with the U.S. Forest Service.Sedona: City of Refugees is a biting look at a modern-day American tourist community caught in the throes of change. Sedona--considered by many to be more stunning than some of America's national parks--draws more than four million tourists a year. But beneath the surface splendor of the scenery, Sedona is torn by deep conflict, with each political and spiritual faction hustling their individual philosophy.As the novel moves toward its climax, Kathleen uncovers a scheme by her brother-in-law that will adversely affect land near Sedona. In a race against time and the elements to get the story into print, Kathleen comes face to face with a decision she must make about the value of her own life.Sedona: City of Refugees is available for purchase in print and ebook formats. Book Details: Sedona: City of Refugees By Geraldine Birch Publisher: Birch Treehouse Publishing Published: August 2019 ISBN: 978-0578565729 ASIN: B07W6K6W65 Pages: 224 Genre: Contemporary FictionAbout the Author: Geraldine Birch has been a newspaper reporter most of her life, having worked for various community newspapers in Southern California and Arizona. Her work included a ten-year stint as a free-lance writer for the Los Angeles Times.In 1991, she moved to Sedona, Arizona, where she worked as a reporter, editor, and political columnist for the Sedona Red Rock News. Birch's political column "Gerrymandering," was awarded a first place national award by the National Newspaper Association.Her writing has also appeared in the Arizona Republic, the Christian Science Monitor, Opium, Six Hens, and Fiction Attic Press. She is the author of three books, The Swastika Tattoo, a historical fiction; Vision of a Happy Life: A Memoir; and Sedona: City of Refugees, a fictional romance set in Sedona, ArizonaContact: Website: http://www.geraldinebirch.com Twitter: http://www.twitter.com/talesbygerry Promo Link: http://bookbuzz.net/blog/contemporary-fiction-sedona-city-of-refugees/BookBuzz.net 59 Heritage Way Drive Rome, GA 30165Website: http://bookbuzz.net/blog/contemporary-fiction-sedona-city-of-refugees/BookBuzz.net helps indie authors, hybrid authors, and small publishers promote and market their books. We also help with book reviews, publicity, and more. Let's Create Some Buzz For Your Book!!!

08-29-2017 | Industry, Real Estate & Constr …
Market Report
Global Wheelchair Accessible Vehicle Converter Market - Toyota, BraunAbility, Fr …
Apex Research, recently published a detailed market research study focused on the "Wheelchair Accessible Vehicle Converter Market" across the global, regional and country level. The report provides 360° analysis of "Wheelchair Accessible Vehicle Converter Market" from view of manufacturers, regions, product types and end industries. The research report analyses and provides the historical data along with current performance of the global Wheelchair Accessible Vehicle Converter industry, and estimates the future
10-10-2012 | Leisure, Entertainment, Miscel …
El Portal Sedona
Fall Colors of Sedona Special at El Portal Sedona Hotel
This fall visit Sedona and take in all the beauty that is this magical place. El Portal Sedona Hotel is the perfect place to stay while in Sedona and see the Grand Canyon or Oak Creek Canyon. El Portal Sedona is a AAA Four Diamond hotel, was voted as a “Top Small Hotel in the U.S.” by Condé Nast Traveler, and is recommended by National Geographic magazine. It is a unique
02-08-2011 | Industry, Real Estate & Constr …
SEO Essential solutions LLC
DEBnAIR Welcome 2011 Sedona Real Estate Market with Move To Russ Lyon | Sotheby? …
Debb Carl and Airen Sapp (DEBnAIR) have continually navigated the Sedona, Arizona real estate market with finesse and confidence. As of February 1, 2011, the team took their history of success and a desire for continued excellence into the offices of Russ Lyon |Sotheby’s International Realty. In 2010, DEBnAIR had sold over thirty-two properties which is an equivalent of over eight million dollars in Sedona real estate sales.
01-14-2011 | Fashion, Lifestyle, Trends
El Portal Sedona
Past Pet Executive Caters to Pets at El Portal Sedona Hotel
What happens when a lifelong pet lover who built a successful career in the pet care and food industry decides to open a small luxury hotel in one of the most beautiful spots in the U.S.? Visit El Portal in Sedona, Arizona to find out – and be sure to take along your dog. El Portal Sedona Hotel is the original pet friendly hotel in Sedona. El Portal owners
11-12-2010 | Leisure, Entertainment, Miscel …
Lodge at Sedona-A Luxury B&B Inn
Sedona Arizona - Tourists Dream
SEDONA, ARIZONA Sedona, Arizona, 2 hours drive north from burgeoning Phoenix and 90 miles south of the Grand Canyon, lies amidst an ancient forest of juniper and pine, surrounded by the celebrated sculptured pinnacles and mystical vortexes of Arizona Red Rock Country. One of America's premier tourism, recreation, arts, and cultural centers, Sedona enjoys a moderate elevation of 4,500 ft., escaping the desert heat of southern Arizona and mountain snows to the
11-12-2010 | Fashion, Lifestyle, Trends
El Portal Sedona
Come Spend the Holidays with El Portal Sedona Hotel
Fall and winter is the best time to enjoy the great outdoors in Sedona. The weather is mild and the hiking is great. We will be serving up a Thanksgiving and Christmas dinner this year, now is the time to plan your Sedona Fall or Christmas vacation now. One of Arizona's premier tourism, recreation, and resort centers, Sedona, is located in a unique geological part of the country that has captivated
Comments about openPR
OpenPR ist the nicest and most clearly laid out PR platform I have seen to this day. The press releases are displayed very nicely and clearly and without any unnecessary frills. The updates are fast and the finished release looks appealing and is clearly legible. Even with 16 years of experience one discovers new things from time to time. Congratulations!
Gabriele Ketterl, Director Marketing & PR, Menads