Energy and Environment: The Third Stem is Fem Module was Held in Kyiv 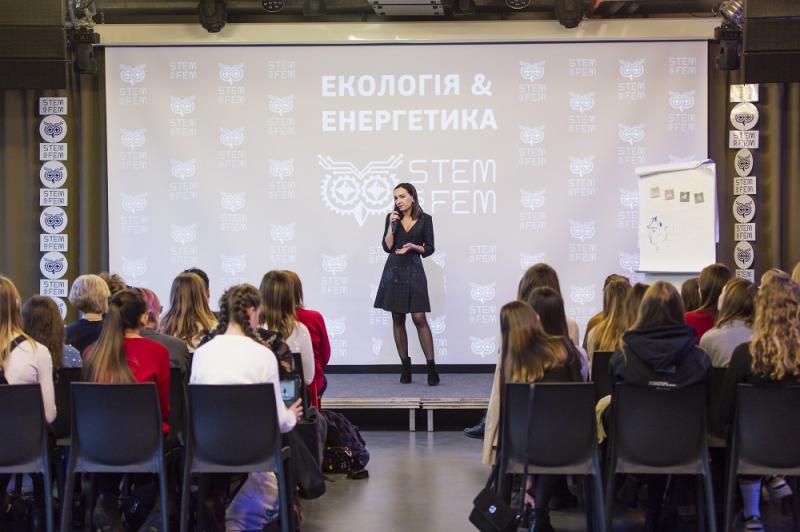 Stem is Fem, an educational charity launched by Gamingtec, held its third course in Kyiv on the 15th and 16th of February. It focused on energy in relation to the environment and Ukrainian girls interested in science, technology, engineering and mathematics were invited to take part. The module was supported by the Ministry of Education and Science of Ukraine alongside UNICEF representatives and the Extraordinary and Plenipotentiary Ambassador of Germany in Ukraine.For more information about the project, please, visit: http://stemisfem.org/enGamingtec initiated the project to encourage girls to study technical sciences. According to statistics, only 27 per cent of all workers in the Ukrainian energy infrastructure are women. Of this 27 per cent, most hold entry level roles. In comparison, 38 per cent of similar positions are held by women in Norway. Of these women, 24 per cent hold high managerial roles.Sapar Karyagdyyev, CEO of Gamingtec, said, 'Stem is Fem aims to involve more girls in discussions of the problems of energy efficiency and environmental awareness. I appreciate the growth of the project, over 150 girls applied to participate in the third module. The winner will go to Rome and take part in the Yale International Alliance Conference on Global Citizenship'.Motivational speakers shared their stories. Anka Feldhusen, the Ambassador for Germany in Ukraine, spoke about her teenage dream of working in Lufthansa. UNICEF Representative Laura Bill discussed her experience of studying Mathematics and Chinese. Hanna Novosad, Ministry of Education and Science in Ukraine, held a Q&A session with participants.Margaryta Shnyr, CFO of Gamingtec, stated, 'I am inspired by the initiation of this project. It was a pleasure to see how many young girls in our country care about the future of our planet and did a great job in their research. This project allows young girls to believe they can become future specialists in the STEM industry and be inspired by women who have already done this'.Stem is Fem's course on energy and the environment educated 30 girls from different Ukrainian cities and towns. All of them received books and souvenirs to remember their two days spent in Kyiv. The grand prize was won by Natalukha Iryna. She received a ticket to the Yale International Alliance Conference that will be held in Rome later this year.175 Long Lane SE1 4GT London, United KingdomEmail: [email protected]Gamingtec is an international software company. Its story started in 2013 when a London-based B2B consulting office was opened. Several months later, an office of own software development was opened in Kyiv. In 2015, Gamingtec changed the approach: the company began to sell not only full turnkey software solutions of the producers, but develop and support its programming product. The company`s founder and CEO is Sapar Karyagdyyev.

You can edit or delete your press release Energy and Environment: The Third Stem is Fem Module was Held in Kyiv here

04-30-2020 | Science & Education
Gamingtec
STEM IS FEM Module Unites Girls Interested in Robotics and Engineering
The Stem is Fem Robotics and Engineering module was held online for the first time on the 11th and 12th of April. The event united Ukrainian schoolgirls that have to stay at home in self-quarantine due to the possible infection with coronavirus. Participants virtually attended lectures and workshops in robotics via Zoom conference and listened to motivational speeches by representatives of Ukroboronprom Concern, NATO Representation to Ukraine, United Nations Population
03-24-2020 | IT, New Media & Software
Gamingtec
Stem is Fem educational module goes online
The charity project Stem is Fem was launched by Gamingtec to popularize STEM education among Ukrainian schoolgirls. The first three modules gathered participants in Kyiv at offline lectures and workshops, while the fourth one, that will be held in April, is going to be held online due to the global COVID-19 pandemic and quarantine provided in Ukraine. For more information about the project, please, visit: http://stemisfem.org/en The fourth educational module of the STEM
01-02-2020 | Science & Education
Gamingtec
Second Module of Stem is Fem Project Uniting Girls Interested in IT
The second module of the Stem is Fem charity project took place in Kyiv from the 14th to 15th of December. It focused on the IT industry and aimed to motivate Ukrainian school girls to study computer sciences. The module was supported by the Minister of Social Policy of Ukraine and leading IT companies, such as Google, Beetroot and Global Logic. Stem is Fem was launched by Gamingtec to form a
11-27-2019 | Science & Education
Gamingtec
IT Module of Stem is Fem Project to take place in Kyiv in December
Stem is Fem charity project launched this year by Gamingtec https://www.gamingtec.com/ has become a significant initiative for Ukrainian teenagers. Twenty-five girls from different cities and villages participated in the first educational module that was dedicated to Bioengineering. It took place in Kyiv in October. The second module of the competition focused on IT technologies is currently open for applicants. Gamingtec launched Stem is Fem project to support high school girls that

04-10-2018 | Advertising, Media Consulting, …
MarketResearchReports.biz
Stem Cell Industry - Exclusive Interviews with Stem Cell Industry Executives
MarketResearchReports.Biz adds “Global Stem Cell Market Share, Size, Trends and Forecast Market Research Report” reports to its database. This report provides a strategic analysis of the Stem Cell and the growth estimates for the forecasted period. Stem cell research has been in process for over five decades. Stem cells have a unique ability to divide and replicate repeatedly, as well as an “unspecialized” nature that allows them to differentiate into a
02-07-2018 | Health & Medicine
Medical Device
Autologous Stem Cell and Non-Stem Cell Based Therapies Market
Autologous stem-cell transplantation (also known as autogeneic, autogenic, or autogenous stem-cell transplantation or auto-SCT) is the autologous transplantation of stem cells—which is, transplantation in which the undifferentiated cells or stem cells (cells from which other types of cells develop) are taken from a person, accumulated, and given back to the same person later. Even though it is most often executed by means of hematopoietic stem cells (antecedent of cells that
11-21-2017 | Health & Medicine
Stem Cell Storage
Global Stem Cell Storage Market By Product Type - Umbilical Cord Blood Stem Cell …
Researchmoz added Most up-to-date research on "Global Stem Cell Storage Market By Product Type - Umbilical Cord Blood Stem Cell, Embryonic Stem Cell & Adult Stem Cell" to its huge collection of research reports. In this report, the global Stem Cell Storage market is valued at USD XX million in 2016 and is expected to reach USD XX million by the end of 2022, growing at a CAGR of XX% between
08-18-2017 | Health & Medicine
Transparency Market Research
Hematopoietic Stem Cell Transplantation Industry Share Report
Global Hematopoietic Stem Cell Transplantation (HSCT) Market: Snapshot The global market hematopoietic stem cell transplantation (HSCT) has been witnessing a high rise in its valuation and size over the last few years and is anticipated to remain doing so over the next few years. The considerable rise in the geriatric population and the increasing prevalence of non-communicable diseases is the key driving force behind the growth of this market. The increasing
05-09-2017 | Health & Medicine
Market Data Forecast
Proceeding of Stem Cells in Asia-Pacific Stem Cell Market.
Asia-Pacific Stem Cell Market research report, published by Market Data Forecast estimates that the market is growing with a CAGR of 15.5% to reach USD 7.15 billion by 2021, from USD 3.48 billion in 2016, which amounts to a cumulative growth of USD 3.67 billion. Stem cells are those cells that are maintained for a long time by remaining undifferentiated and sustained proliferation in a few parts of the body. Stem
04-21-2017 | Associations & Organizations
Mental Fitness 21st Century Learning Inc.
STEM Summer Camp 2017
Join Mental Fitness for our second annual Summer of STEAM camp in South Fulton County. Our campers continue their learning in a fun and engaging way while still enjoying the summer! Your student will experience a half day of hands-on project based learning and a half day of good old fashion summer fun. High level concepts like electricity and magnetism, computer coding, environmental projects and more.
Comments about openPR
OpenPR is clearly structured and remains true to its principle of confining itself to the essential parts. OpenPR has proven to be a very good and reliable partner to our media agency: Within the shortest time the releases are online and go down well with the media representatives. The success of OpenPR is reflected in the steadily increasing number of press releases. It is good that OpenPR exists!
Ursula Koslik, Director Marketing & PR, F+W Hamburg