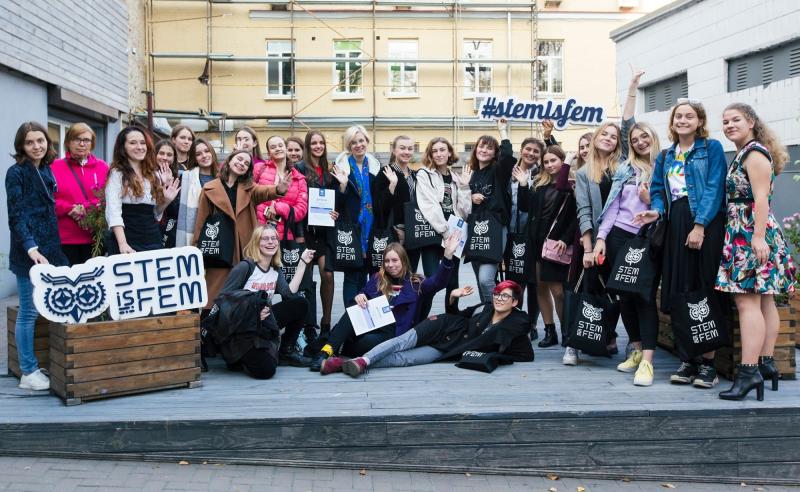 Stem is Fem charity project launched this year by Gamingtec https://www.gamingtec.com/ has become a significant initiative for Ukrainian teenagers. Twenty-five girls from different cities and villages participated in the first educational module that was dedicated to Bioengineering. It took place in Kyiv in October. The second module of the competition focused on IT technologies is currently open for applicants.Gamingtec launched Stem is Fem project to support high school girls that are interested in studying technical sciences and plan to get themselves into the IT industry or other technical fields. The project brings together female experts and successful companies willing to share experience and knowledge with the participants of the module.Sapar Karyagdyyev, CEO of Gamingtec, came up with an idea to start an educational course and to give an opportunity to girls change their lives by meeting like-minded people, talking to peers that have the same interests as they do, and feeling not alone in a “man`s” world. ’I speak four languages and I graduated from three universities, I know what education matters and how one opportunity can change a person`s life’, said Sapar. The first Bioengineering module has passed well: girls from around Ukraine spent two days in Kyiv doing a lot of practical learning assignments. Natalia Snigur, a student that achieved the best results, won a trip to Poland where she attended a Women in Tech Summit and got international networking experience.’It was an awesome chance to meet powerful women from around the globe, visit panel discussions and ensure that gender does not matter. The only real power is a desire to study and work in a field you really love and feel excited by,’ told Natalia.The second educational module dedicated to IT technologies is currently open for applicants. To participate in it, girls should pass an online test. It is foreseen that thirty schoolgirls will be invited to Kyiv to attend a two-days module with lectures, excursions, and practical challenges. More details about Stem is Fem project are available at the website: http://stemisfem.org/en175 Long Lane SE1 4GT London, United KingdomGamingtec is an international software company. Its story started in 2013 when a London-based B2B consulting office was opened. Several months later, an office of own software development was opened in Kyiv. In 2015, Gamingtec changed the approach: the company began to sell not only full turnkey software solutions of the producers, but develop and support its programming product. The company`s founder and CEO is Sapar Karyagdyyev..

04-30-2020 | Science & Education
Gamingtec
STEM IS FEM Module Unites Girls Interested in Robotics and Engineering
The Stem is Fem Robotics and Engineering module was held online for the first time on the 11th and 12th of April. The event united Ukrainian schoolgirls that have to stay at home in self-quarantine due to the possible infection with coronavirus. Participants virtually attended lectures and workshops in robotics via Zoom conference and listened to motivational speeches by representatives of Ukroboronprom Concern, NATO Representation to Ukraine, United Nations Population
03-24-2020 | IT, New Media & Software
Gamingtec
Stem is Fem educational module goes online
The charity project Stem is Fem was launched by Gamingtec to popularize STEM education among Ukrainian schoolgirls. The first three modules gathered participants in Kyiv at offline lectures and workshops, while the fourth one, that will be held in April, is going to be held online due to the global COVID-19 pandemic and quarantine provided in Ukraine. For more information about the project, please, visit: http://stemisfem.org/en The fourth educational module of the STEM
02-24-2020 | Energy & Environment
Gamingtec
Energy and Environment: The Third Stem is Fem Module was Held in Kyiv
Stem is Fem, an educational charity launched by Gamingtec, held its third course in Kyiv on the 15th and 16th of February. It focused on energy in relation to the environment and Ukrainian girls interested in science, technology, engineering and mathematics were invited to take part. The module was supported by the Ministry of Education and Science of Ukraine alongside UNICEF representatives and the Extraordinary and Plenipotentiary Ambassador of Germany
01-02-2020 | Science & Education
Gamingtec
Second Module of Stem is Fem Project Uniting Girls Interested in IT
The second module of the Stem is Fem charity project took place in Kyiv from the 14th to 15th of December. It focused on the IT industry and aimed to motivate Ukrainian school girls to study computer sciences. The module was supported by the Minister of Social Policy of Ukraine and leading IT companies, such as Google, Beetroot and Global Logic. Stem is Fem was launched by Gamingtec to form a

12-01-2017 | IT, New Media & Software
Market Research Hub
Ukraine: Country Intelligence Forecast Report 2022
To Understand the information and communication Industry Status worldwide, Market Research Hub (MRH) has included the recent Forecast report titled “Ukraine: Country Intelligence Report”, to its vast database. This study offers data about the prime regions operating in the ICT sector, along with their production, consumption, revenue and market share details. Further, the intelligent report also anticipates that the market would grow at a constructive CAGR until 2022. Click here for
06-12-2017 | Industry, Real Estate & Constr …
ReportsWorldwide
Agrochemicals Market in Ukraine
ReportsWorldwide has announced the addition of a new report title Ukraine: Agrochemicals: Market Intelligence (2016-2021) to its growing collection of premium market research reports. The report “Ukraine: Agrochemicals: Market Intelligence (2016-2021)” provides market intelligence on the different market segments, based on type, active ingredient, formulation, crop, and pest. Market size and forecast (2016-2021) has been provided in terms of both, value (000 USD) and volume (000 KG) in the report. A
03-09-2017 | Advertising, Media Consulting, …
GlobeMetrix
Global Rye Market 2017 - Ukraine , Turkey, Spain
The report entitled Global Rye Market 2017 presents key insights into the global Rye market along with the latest up-to-date industry details and forthcoming Rye industry trends, which will assist the readers to focus on product specification and end users driving the overall market revenue and profitability. Report Keynotes: The main motive of the report on "Global Rye Market 2017" is to study comprehensive details of the market investors, key industry players
03-07-2011 | Business, Economy, Finances, B …
Zorg Biogas AG
Poultry will power vehicles in Lugansk, Ukraine
02 March 2011 Zorg Biogas AG has started the documentation design of biogas plant in Lugansk region, Ukraine. Investments estimate to several million Euros. The plant will process 60 tons of poultry dung per day. Biogas will be purified to the condition of bio-methane. Gas yield will reach 183 m3/hour of gas according to GOST 5542-87, with methane content 95%. Bio-methane, an analogue of natural gas, will be used as a vehicle
11-02-2010 | Energy & Environment
ZORG UKRAINE Ltd.
Biogas attracts investors in Ukraine
In course of 2010 in Ukraine the development rate of alternative energy industry has significantly increased due to investments from NAER, credits provided by IFC and EBRD, ratification of an agreement between Ukraine and NEFCO and, finally, the adoption of law “About the green tariff.” Yet, Darya Revina, the head of Committee on ecological investments, alternative and renewable energy sources ICC Ukraine and Council of entrepreneurs within the Cabinet of
08-09-2010 | Energy & Environment
ZORG UKRAINE Ltd.
Ecological investments 2010 in Ukraine
On 28th of July 2010, official website of Ukrainian government presented to the public a resolution № 671, regulating this year’s budget on prevention of CO2 emissions and further development of international cooperation in relation to proactive mitigation of global climate change. As reported by National Ecological Investments Agency representatives, funds provided by Japan for the purchase of Ukrainian quotas of CO2 emissions, will be used for employment of alternative
Comments about openPR
I can't but agree to the positive statements about your portal: easy to use, clear layout, very good search function, and quick editing!
Jens O'Brien, Borgmeier Media Communication